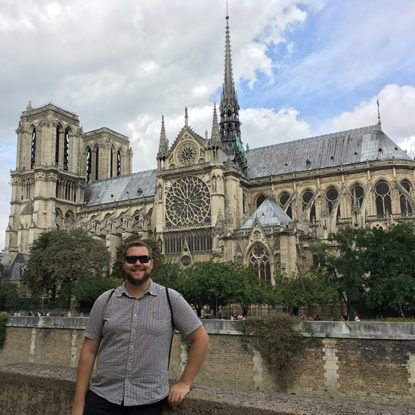 All Angelenos have been caught on a rainy day in Los Angeles without an umbrella. But, if you’re Garrett Collins, going umbrella-less is a way of life. See, Garrett grew up in soggy Portland where using an umbrella is frowned upon. And he brought that bold philosophy with him when he moved to L.A.

Besides being passionate about architecture and interior design, Garrett is also inspired by automotive design. In fact, he’s a real car enthusiast. Outside of the office, you can find him at local car clubs, going for spirited drives on curvy mountain roads, or dropping by car shows.

Garrett also enjoys photography, traveling, and playing board games with friends. When it comes to sports, he’s a fan of basketball (Portland Trailblazers) and football (USC Trojans). His professional past is vast and varied, and his most unusual job was removing wallpaper! But he loves contributing all of his experience and passions to the team spirit he’s found working at ENV.